Filing a complaint against an Elgin Police Department employee 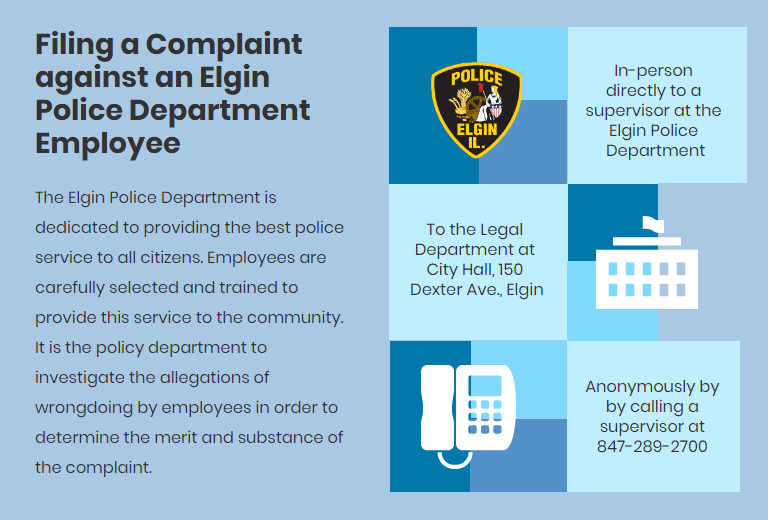 Who is responsible for investigating complaints brought to the attention of the department?

In most cases, the employee’s direct supervisor will conduct a preliminary fact finding investigation through consultation with the person making the complaint.  The person making the complaint has the option to complete a Citizen Complaint form; however, completion of this form is not mandatory and the supervisor can complete the form on the person’s behalf.  View the Citizen Complaint Form

The nature of the complaint determines the appropriate investigative authority which is described below:

A new statue was enacted by the State of Illinois on July 1, 2021, which enables the Attorney General’s Office to conduct investigations whenever the Attorney General’s Office has reasonable cause to believe that a governmental authority or agent of a governmental authority engaged in a pattern or practice of conduct by officers that deprives any person of rights, privileges, or immunities secured or protected by the Constitution of Illinois, the Attorney General may commence a civil action in the name of the People of the State to obtain appropriate equitable and declaratory relief to eliminate the pattern or practice.  Refer to 15 ILCS 205/10 to obtain additional information on these investigations.

Will the department employee know that a complaint has been made against him or her?

The department strives to adhere to State of Illinois Statutory provisions as it pertains to both sworn and non-sworn employees, which are described below:

How long will the investigation take?

What if an allegation/complaint turns out to be false?

If a complaint is made on a good faith belief of truth and the department member is exonerated, the investigation will conclude.

What will happen to the department member in question?

If, after a complete investigation, it is determined that the allegation is substantiated, the discipline will be dependent on the seriousness of the infraction. Disciplinary actions may range from an oral reprimand to suspension, or in extreme cases, termination.